LinkSquares Raised a $40 Million Series B 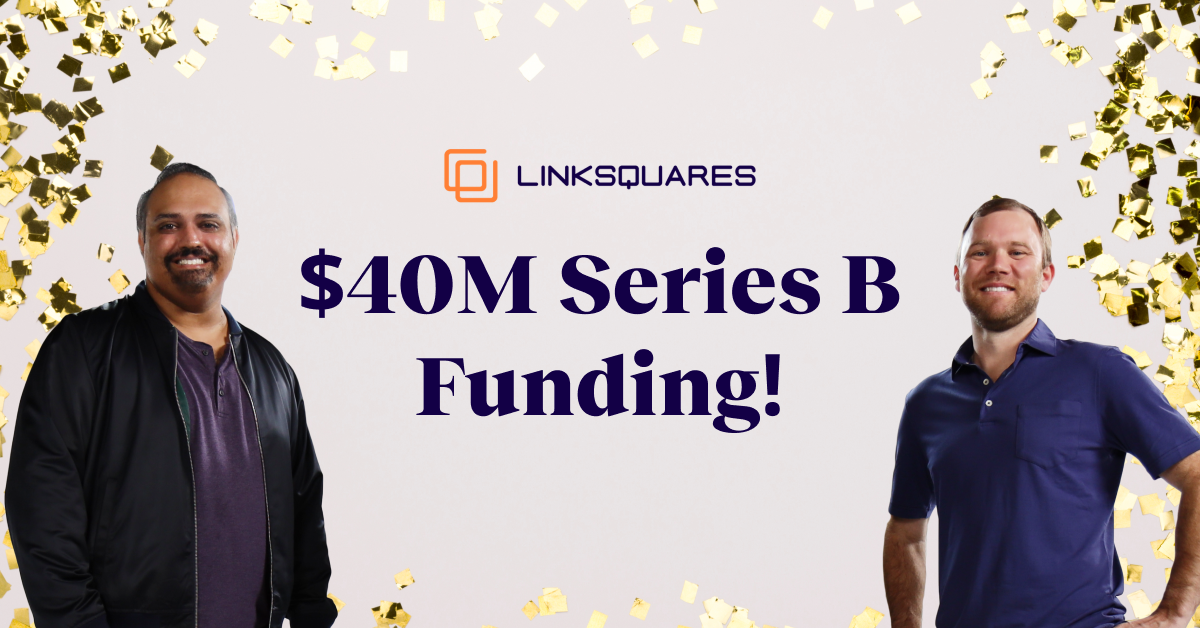 As CEO of LinkSquares, I'm thrilled to announce that we've raised a $40 million Series B, led by Sorenson Capital. New investors Catalyst Investors, Xerox, Bottomline Technologies, DraftKings' founders and key legal and compliance executives, as well as our existing investors participated in the round which will help accelerate our rollout into new partnerships and new markets.

The future for LinkSquares is extremely bright. Before I go into what’s next for LinkSquares, I wanted to take the opportunity to thank the team behind achieving this important company milestone. None of this would have been possible without you.

To our LinkSquares employees:

Everyday, I get to see the dedication and tireless effort of this team in making LinkSquares a market leader, which is truly an inspiration. I’ve never seen a team with this hustle, drive, and motivation to win - against all odds, in any situation, and I thank you all.

Thank you for trusting and believing in us, and working together on building the vision for the next generation of contract management software; you make it all possible. It is truly an honor to lead this company and work with incredible people on both sides to make our dreams into reality.

To our Board of Directors and Investors:

You’ve all been true evangelists, supporters, and drivers of growth for LinkSquares. Thank you for believing in our mission of transforming the legal tech industry.

In particular, I wanted to recognize Jere Doyle, who has been instrumental in guiding the success of LinkSquares over the last four years. With new investors come changes to our board, and Jere is stepping down. I want to personally thank Jere for all his hard work. LinkSquares wouldn't be where it is today, and I wouldn't be who I am as CEO, without his efforts and insights. Thank you, Jere.

Stepping in for Jere as Board Director is Danielle Sheer, General Counsel at Bottomline. As sad as we are to see Jere go, we're just as excited for what Danielle brings to the table. She'll be key to helping LinkSquares reach the goals we set when we raised this Series B.

What’s Next for LinkSquares

With this infusion of capital, we are laying out some big goals. So, what exactly are these goals?

Well, it all comes down to boats.

Innovation in technology can often -- in hindsight -- be broken down into major steps. Boats, for example, started as manually-powered vessels, then became wind-powered, then engine-powered, then nuclear. Each new power source brought new possibilities. Legal software is much the same, and we're on the cusp of a transition from one power source to another.

For most of their history, law firms and legal departments ran on manual power. Whatever the problem was, the solution was to just throw more people and more billable hours at it. And whether you had the legal staffing equivalent of a tiny one-man rowboat or a huge viking oar ship, you were still limited by how many people you could afford.

After oar ships came sailing vessels, where we learned to harness the power of the wind. Now, the speed and carrying capacity of a vessel didn't scale linearly with how many people were powering it. The apex of these were tall ships, with multiple huge masts that could consistently cross oceans, rather than hug the shores.

When law firms discovered software, they became tall ships. With time-tracking and Lexis Nexis and email and spreadsheets, law firms could do more than was ever possible with mere manual power. With traditional software, what your legal team could do was no longer limited by the number of people you employed.

Today, we're witnessing the next major step up in power, thanks to artificial intelligence software. AI is creating legal solutions that can outpace and outperform traditional software in the same way steamships and diesel-powered vessels could outperform even the most impressive wind-powered tall ships.

And, much like the naval transition, we're seeing a lot of half-steps in technical evolution. The first steamships were still mostly wind-powered tall ships, but with a boiler and paddle-wheels bolted on. They could do more than regular tall ships, but it wasn't until shipwrights began designing engine-powered vessels "from the keel up" that modern global sea commerce became possible.

LinkSquares is a legal solution built around AI from day one. We didn't bolt AI onto an old, traditional software suite. We use machine learning to automate, accelerate, and improve legal processes that previously only human beings could perform. The advantages of that approach are profound.

When boats were designed around an internal, industrial power source, it fundamentally changed what a boat could be. Before engine power, you more or less had warships or cargo ships, nothing more. With engine power, suddenly you could have cargo ships and warships and luxury liners and ice-breakers and submarines and even aircraft carriers, the latter being an impossible use-case for any sailing vessel.

Likewise, LinkSquares is changing what a legal software solution can do and be.

That's why we raised this Series B: to accelerate the AI revolution of legal software, and to build the legal-tech solutions that simply weren't possible before.

For starters, we are developing new products that power every part of the contracting process with AI, which we believe will offer functionality no one has seen before. In the next few months, we're excited to launch a first-of-its-kind product that will change the way businesses complete the contracting process.

It's an ambitious goal, and I'd understand if you thought it might be too much to expect from a relatively young company started by two "dirt dogs" from Boston. But when my co-founder Chris and I started LinkSquares, we built it on the fundamental principle of listening to our customers and working to meet their needs, not ours. It sounds simple, but it's really hard.

If the established players in legal software were interested in being customer-focused and innovation-obsessed, they'd have built LinkSquares five years ago. But, just as shipwrights who grew up building tall ships could only bolt boilers onto their old designs, it takes a fresh perspective to realize the power of what engines -- and AI -- can really do. We built LinkSquares because the other guys can't, including other "AI startups" in our space.

To understand what I mean, consider the last great leap in naval innovation: nuclear power.

Some people saw engines as a way to simply make better versions of the cargo ships that came before. Those people stretched that idea to the limit, creating container ships that, trapped by old thinking, are simply overwhelmed by modern demands and tip over into the sea. This kind of "innovation" leads to firms that use off-the-shelf AI to simply make faster versions of traditional legal software, which is just as unequal to modern legal teams' needs.

Artificial intelligence designed and built for legal teams is the nuclear power plant of legal technology. It leads to designs that can do more than previous solutions, not just the old stuff faster. Nuclear power leads to submarines that can operate submerged for months at a time, and supercarrier battle groups that can secure 500 square miles of ocean. AI designed for legal leads to software that can read and understand your contracts, not just "containerize" your old processes. That's the level of innovation we've embraced here at LinkSquares.

We're writing our own AI, not using someone else's. We're developing new kinds of legal tools, not just jamming AI into old legal software. We're building the operating system for the modern legal team. That's why we raised this Series B.

And we can't wait to see what's over the horizon.

Up and to the right.

Vishal Sunak is the co-founder and CEO of LinkSquares.

Stay up to date on best practices for GCs and legal teams, current events, legal tech, and more.

How We Used LinkSquares to Accelerate Our Series B Fundraising

This past July, we were thrilled to announce our $40M Series B fundraising round. Besides being our largest financing effort to ...
Start Reading
Vishal Sunak Nov 26, 2021 7 min read

How to Raise Capital for Your Business

This article was originally published in Inc. Masters on 11/12/2021.
Start Reading